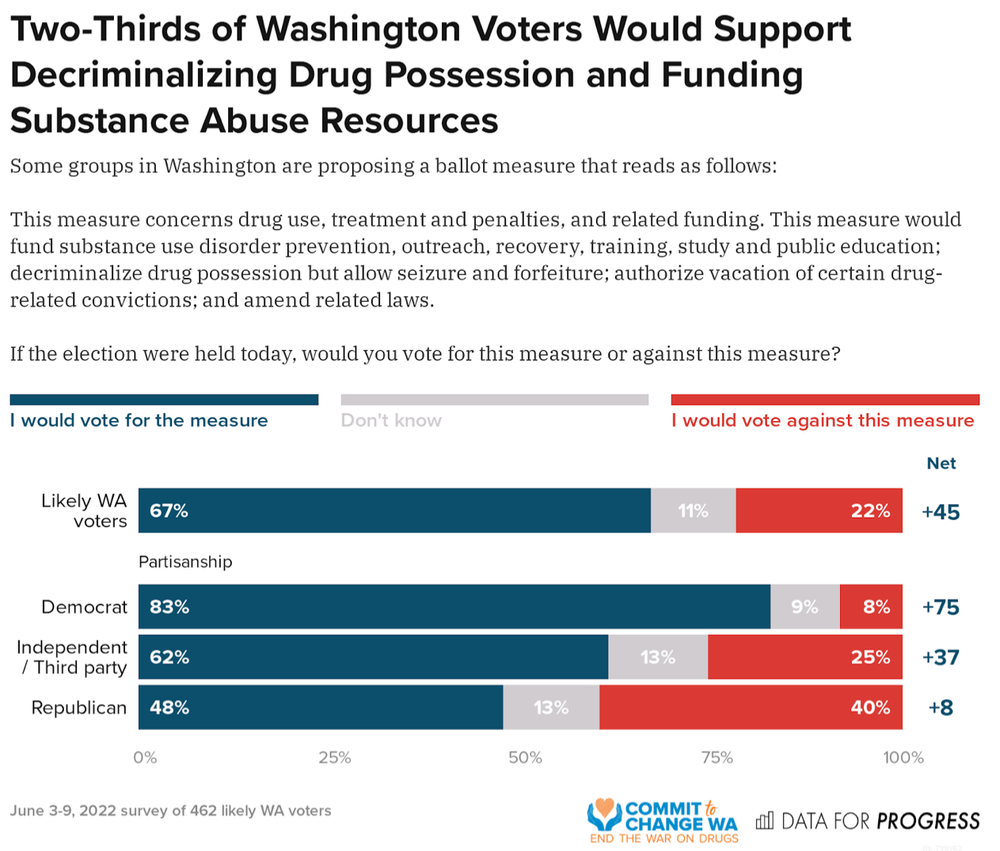 The campaign behind an effort to decriminalize drugs and expand treatment and recovery services in Washington State has halted its push to qualify an initiative for November’s ballot.

Instead, Commit to Change WA told supporters in an email Monday, advocates will focus on the next year’s legislative session.

“We will not be moving forward to qualify Washington State Initiative Measure No. 1922 to the November 8 general election ballot,” the group said. “Signature gathering proved more challenging and prohibitively expensive than projected.”

“This is especially hard news for us, because we were going to win,” the email continued, pointing to new polling conducted this month indicating that 67 percent of likely Washington voters would have voted for the measure after reading the ballot language. Twenty-two percent said they would vote against it and 11 percent were undecided.

The survey, conducted by Data for Progress, found that strong majorities of Democrats and independents, along with a plurality of Republicans, back the decriminalization measure.

Looking ahead to the next legislative session, the poll also shows that 56 percent of likely voters say they are more likely to support candidates for elected office who back removing criminal penalties for low-level drug possession.

“Though the proposed Initiative 1922 will no longer be on Washington ballots this November, legislators in the state must note that Washington voters are ready to end the War on Drugs and want to start treating substance use issues with compassion and data-backed policies,” the polling memo concludes.

If the proposed ballot initiative, I-1922, had become law, it would have eliminated the state’s existing penalties around possession and use of all drugs. Authorities could still seize illegal substances, but law enforcement would then have to refer individuals to outreach services, where people could access treatment and be connected with other support programs.

The proposal would also expunge past convictions for drug possession and use, removing blemishes from criminal records that can prevent people from finding jobs, securing housing and going to school. And it would pour millions in state funds, including a major portion of cannabis tax revenue, to expand outreach, treatment and long-term recovery services to support people with substance use disorder.

The failure to put the policy choice to voters means lawmakers will have drug policy on their to-do list next year. Due to a hasty lawmaking process following a surprise state Supreme Court decision in February 2021 that invalidated the state’s felony law against drug possession, the state’s current prohibition on having drugs—now a misdemeanor—is set to expire on July 1, 2023.

For now, however, the missed initiative goal is another frustrating setback for those in the state who’d like to see a more health-centered approach to drug use disorders. Commit to Change WA, an ACLU-sponsored coalition of dozens of individuals and local groups (formerly organized under the name Treatment First WA), has been working for years to shift the state’s conversation on drugs toward treatment and harm reduction.

In 2020, the same year voters in neighboring Oregon passed a similar ballot measure to decriminalize drugs and fund access to treatment and harm reduction services, Washington advocates were working to qualify a similar measure. But the outbreak of COVID-19 interrupted that year’s signature gathering effort and organizers turned their focus to the legislature.

After months of delay, state lawmakers last session introduced House Bill 1499, which included many of the group’s suggestions. But the bill failed to advance out of committee before a legislative deadline. Just weeks afterward, the state Supreme Court’s surprise ruling sent lawmakers scrambling back to the drafting board to replace the state’s drug law anyway.

The new law, which took effect in May 2021, was widely seen by advocates as a half-step toward meaningful reform by reducing the state’s felony charge for drug possession to a misdemeanor and earmarking more money for treatment. The 2023 expiration date on its criminal penalties was intended to give lawmakers more time to consider how and whether to alter the state’s underlying approach to drugs.

“This has been a long and winding road,” Commit to Change WA said in its email to supporters on Monday. “We’re sad not to be able to give you the opportunity this November to weigh in on Washington’s approach to drug use and substance use disorder, but we’re counting on you being ready to weigh in with the legislature in January.”

The campaign did not respond to follow up questions sent by Marijuana Moment.

Rep. Roger Goodman (D), a longtime proponent of ending the drug war who helped write the current law’s expiration provisions, didn’t reply to an email from Marijuana Moment on Monday asking how the failure of I-1922 to qualify for the ballot might affect the coming legislative session.

The lawmaker told Marijuana Moment in April of last year that he believed that by 2023, his more skeptical colleagues might be more willing to accept a move away from punitive drug policies.

“The conversation on the failure of the drug war only keeps going the same direction. We’re almost at the tipping point now where we are at a completely new paradigm,” Goodman said at the time. “Two years from now, that conversation will mature further and be even more progressive. The voters and the legislators and the public will be moving that direction. We have to go slow and steady, unfortunately.”

While the year ahead could still be pivotal for drug policy in Washington, it’s not clear how changes in the political winds might affect chances for major reform. Polling released earlier this year showed a 10-point upswing in Washington voters identifying as Republicans, and voter registration data from 43 states indicates that more than a million voters have switched their registration to the GOP.

Earlier polling in April of this year released by the Commit to Change campaign, meanwhile, indicated that while certain issues had voters’ attention—such as homelessness, problem drug use and drug dependency, and drug overdoses—poll respondents were comparatively unconcerned about police violence against the poor and people of color or too many people being arrested and imprisoned.

State lawmakers briefly considered a bill this earlier this year that would have legalized what the legislation called “supported psilocybin experiences” for adults 21 and older. But that proposal failed to pass out of committee by a legislative deadline.

Meanwhile, a separate group of Washington activists launched a psilocybin ballot initiative this year but also recently announced they will not succeed in placing the measure before voters in 2022.