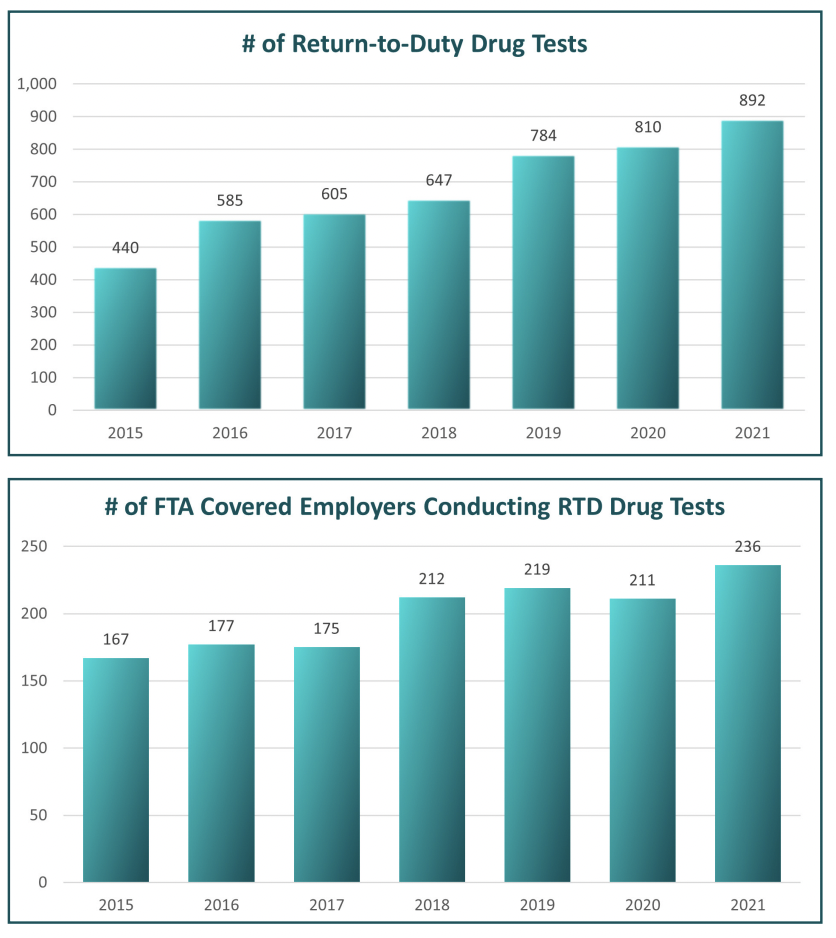 The Department of Transportation (DOT) is reiterating that the workforce it regulates is prohibited from using marijuana and will continue to be tested for THC, regardless of state cannabis policy.

In a July newsletter from DOT’s Federal Transit Administration (FTA), the agency included two sections on cannabis issues: the first reminds employees that they’re barred from using marijuana—regardless of state legalization—and gives an update on DOT drug testing trends. The second warns that while hemp-derived CBD may be federally legal, such products remain unregulated and could contain THC levels that are detectable in a drug test.

“Recently, some states and local governments have passed legislation prohibiting employers from testing for marijuana,” the bulletin states. “FTA employers are reminded that state and local legislative initiatives have no bearing on DOT regulated testing programs. Marijuana is still a drug listed in Schedule I of the Controlled Substances Act.”

That said, the newsletter also highlights data signaling that more workers are being afforded a second chance to return to work after an initial drug violation instead of being fired on the spot.

“One of the potentially telling statistics is the increase in both the number of Return-to-Duty (RTD) tests conducted and the number of FTA-covered employers performing this type of test,” it says. “This data indicates a trend toward a ‘second-chance’ policy versus a ‘zero tolerance’/termination policy following a DOT drug violation.”

The data doesn’t disaggregate drug tests, so it’s unclear what portion related to marijuana violations, but federal cannabis testing policies have been increasingly criticized, both because metabolites of the drug can stay in a person’s system for weeks after consumption and because the policy itself can deter qualified people from applying for critical roles.

In a letter sent to Transportation Secretary Pete Buttigieg in May, Rep. Earl Blumenauer (D-OR), for example, argued that DOT’s cannabis testing policies are unnecessarily costing people their jobs and contributing to supply chain issues. He urged a review and administrative reform of the guidelines.

Buttigieg, who campaigned on a pro-legalization platform during his 2020 presidential bid and repeatedly condemned the harms of prohibition—going so far as to call for decriminalizing possession of all drugs—has yet to take any administrative steps to modernize DOT marijuana policy since taking the helm of the department. Marijuana Moment reached out to the secretary’s office for comment, but a representative did not respond by the time of publication.

“Cannabidiol (CBD) is a chemical from the cannabis plant that is different from and does not contain tetrahydrocannabinol (THC). However, CBD is not a regulated substance, and thus products claiming to contain CBD only have not been evaluated or regulated by a Federal agency,” it says. “Therefore, the product may contain levels of THC that could generate a positive drug test. Using a CBD product is not a justification for excusing a positive drug test, and procedures for drug positives should follow as usual.”

An earlier 2020 notice from DOT did clarify that workers in safety-sensitive positions under its regulations will not be specifically tested for CBD, however.

While DOT will continue to test workers for THC, the department did also recently propose a revised drug testing policy.

Current department policy mandates urine testing, but the proposed rule change would allow saliva-based tests as alternate option. Depending on frequency of use, THC is generally detectable in saliva anywhere from one to 24 hours after use, rather than weeks for urine.

Further, the DOT proposal says there would be a “4 nanogram per milliliter screening test cutoff for THC,” which “would detect use of marijuana while eliminating possibilities of positive tests resulting from passive exposure.”

A top Wells Fargo analyst said in February that there’s one main reason for rising costs and worker shortages in the transportation sector: federal marijuana criminalization and resulting drug testing mandates that persist even as more states enact legalization.

Workplace drug testing issues continue to be raised, especially as more states move to legalize cannabis in some form and many industries are facing workforce shortages.

A recent congressional spending bill report for Financial Services and General Government (FSGG) includes a section calling on the White House Office of Personnel Management (OPM) “to continue to review policies and guidelines regarding hiring and firing of individuals who use marijuana in states where that individual’s private use of marijuana is not prohibited under the law of the State.”

It also specifically urges the executive branch to apply drug testing standards with “consistency and fairness.”

OPM did issue a memo to federal agencies last year that says admitting to past marijuana use should not automatically disqualify people from being employed in the federal government.

Meanwhile, a key Senate committee approved a measure last month that would prohibit the federal government from denying people the security clearances they need to work at intelligence agencies simply because they’ve used marijuana.

Federal agencies have taken different approaches to employment policies with the ever-changing marijuana landscape in the U.S.

Late last year, the director of national intelligence (DNI) issued a memo saying that federal employers shouldn’t outright reject security clearance applicants over past use and should use discretion when it comes to those with cannabis investments in their stock portfolios.

The Environmental Protection Agency (EPA) recently reminded its workers that they are prohibited from using marijuana—or directly investing in the industry—regardless of state law and changes in “social norms” around cannabis.

The White House recently made clear that people who want to even intern at the president’s office will be required to disclose prior drug use—including any cannabis consumption that was legal under state law—and they could be denied eligibility over it.

The Biden administration previously found itself facing criticism after reports surfaced that it had fired its own White House staffers over marijuana.

Then-Press Secretary Jen Psaki attempted to minimize the fallout of the White House personnel policy, without much success, and her office also stressed that nobody was fired for “marijuana usage from years ago,” nor has anyone been terminated “due to casual or infrequent use during the prior 12 months.”

However, she consistently declined to speak to the extent to which staff have been suspended or placed in a remote work program because they were honest about their history with marijuana on the federal background check form.

In April, a top federal health agency proposed changes to drug testing policies for federal workers to clarify that having a doctor’s recommendation for medical marijuana or any other Schedule I drug is not a valid excuse for a positive drug test.

Also earlier this year, a coalition of more than two dozen congressional Democrats filed bill on promoting workplace investment to combat climate change, and they said they want to boost the workforce nationwide by protecting people in legal marijuana states from being penalized due to federal drug testing policies.

The post Transportation Department Reminds Workers They Can’t Use Marijuana And Cautions Against CBD appeared first on Marijuana Moment.