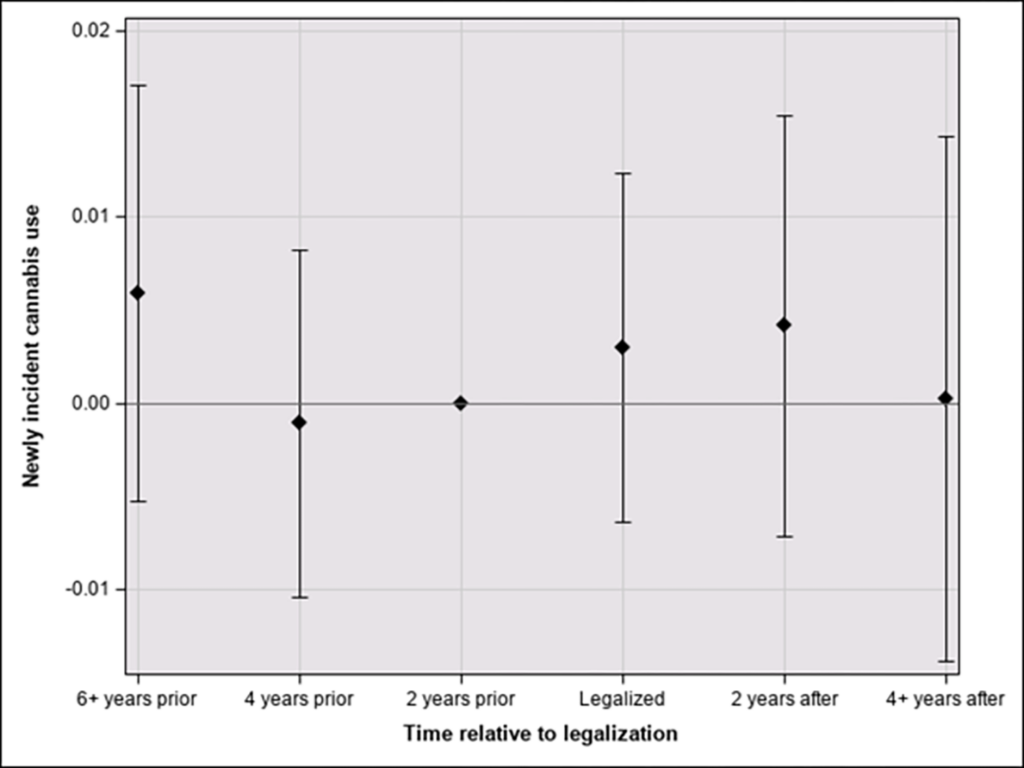 A perennial question around legalizing cannabis for adults is whether it leads to more young people trying the drug. According to a new study by Michigan State University researchers, the answer so far is no—although the policy change does seem to lift the number of adults picking up marijuana for the first time.

“We offer a tentative conclusion of public health importance,” write the authors of the peer-reviewed research article, published late last month in the journal PLOS One. “Legalized cannabis retail sales might be followed by the increased occurrence of cannabis onsets for older adults, but not for underage persons who cannot buy cannabis products in a retail outlet.”

The new paper, funded in part by the National Institutes of Health, claims to be the first-ever publication to examine incidence of use, or when people initially consume cannabis, as the result of adult-use legalization. Past studies have instead focused on prevalence, trying to measure legalization’s effects on how much cannabis people use or how often they use it.

“[T]here has been no policy influence on cannabis incidence in the underage adolescent population after adults have been allowed to buy cannabis in retail shops.”

To emphasize the importance between incidence and prevalence in understanding what youth use actually looks like, the authors point to existing research on youth alcohol use. Studies in 2016 and 2018 indicated that a large proportion of young adults in the U.S. deliberately abstained from drinking alcohol until they could legally do so—an observation that wasn’t apparent from prevalence data alone. The research group hypothesized that the same trend might be true with cannabis.

“The impetus for this paper is sometimes I’ll hear, ‘So-and-so would’ve used cannabis whether it was legal or not,’” the study’s lead author, Barrett Wallace Montgomery told Marijuana Moment. “And to me that didn’t seem like such a given.”

“This analysis, it certainly hasn’t proved it, but it’s provided good evidence that that is not the case that legalization does sort of promote the use of that drug,” he continued.

The paper’s findings suggest that legalizing cannabis for adult use does indeed seem to increase first-time cannabis consumption, but only among people who can actually use the drug legally.

Among people 12 to 20 years old—for whom recreational marijuana use remains unlawful in all states—researchers found no evidence of an increase. The results do show minor increases and decreases in cannabis use over time, but those can’t be linked to legalization. “There is no indication that those deviations are anything but chance,” Montgomery said. “Just normal, expected deviation over time.”

By contrast, the number of adults 21 and over trying cannabis for the first time might double or triple after adult-use legalization, Montgomery noted in a tweet the day the paper was published.

“I thought it would be helpful to contextualize just how big of an effect that is,” he explained in an interview, “because when you think about it, the largest effect size in that 21-plus age group is one 1.3 percentage points, which doesn’t seem very large.”

New article just published in @PLOSONE on the effect of recreational #cannabis legalization on first time cannabis use. Passage of RCL might double or triple the number of people trying cannabis at age 21 or older, no effect on ages 12-20. Link below. #drugpolicy #epitwitter pic.twitter.com/HRSS4897AM

The research team drew on public data from more than 800,000 respondents to the National Survey on Drug Use and Health, an anonymized survey of Americans 12 and older. (Montgomery, who was a Michigan State researcher when the study was conducted, has since taken a job at RTI International, a research nonprofit that conducts the surveys through a contract with the federal government’s Substance Abuse and Mental Health Services Administration.)

Researchers then used an analysis method called the event study model in an effort to estimate the causal effect of legalization on cannabis use. They grouped respondents into two age groups: young people aged 12-20 and adults 21 and older.

Using the so-called event study model of statistical analysis, researchers attempted to demonstrate legalization’s causal effect on first-time cannabis use. In addition to comparing use in legal-cannabis states to use in states where cannabis remained illegal, they also projected how use would have looked in legal states had legalization not occurred.

The goal wasn’t just to show correlation but actual causation, Montgomery said. “We made every attempt at making this as causally inferential as possible.”

Because states legalized cannabis at different points in time, researchers started by standardizing the use data from each jurisdiction relative to when legalization took place. They also examined the implementation of legal cannabis laws and found that the effects of the policy change typically lagged a couple years behind a law’s passage.

“Change doesn’t happen overnight just because of a policy change. It takes time for policy to effect a broader, more complex system,” the researcher said. “In turn, those systemic changes are what might be assessed, these measurable outcomes in the population.”

While the study was focused on incidence, the team also applied its analytical approach to data about prevalence. “When we did the same analysis and looked at prevalence, we found estimates that were almost identical to what had been reported,” Montgomery said.

But the research team feels their paper’s emphasis on first-time use, rather than prevalence, makes it more useful for determining what prevents people from trying cannabis before they’re of age.

“This really came out of my interest in wondering how much sway a legal minimum age has,“ Montgomery said. “This sort of has shown me that, yeah, it’s a pretty powerful policy tool.”

Many observers, including parents and health researchers, have expressed worries over the potential health impacts on young people following legalization. Critics of the policy change, meanwhile, have gone further, sometimes issuing sweeping warnings with little evidence to back them.

“If you legalize marijuana, you’re going to kill your kids,” Nebraska Gov. Pete Ricketts (R) told reporters last year, amid discussions of legalization in that state. A spokesperson later clarified that he was referring to a reported increase in marijuana use among teens who died by suicide. Those findings, however, don’t speak to what leads teens to first pick up cannabis.

Authors of the new paper acknowledge that cannabis policy research “does not yet qualify as a mature science,” noting there’s still considerable disagreement over the ways in which legalization might impact use.

Most published evidence suggests that prevalence of cannabis use by youth either didn’t significantly change or perhaps dropped among some sub-populations, they write, while “a minority of studies provide firm evidence of appreciable cannabis use prevalence increases among adolescents.” As for frequency of use by youth, it continues, “the published estimates show no changes.”

In a blog post about the new study, the advocacy group NORML called the findings “consistent with those of prior studies reporting that adult-use legalization is not associated with either increased use or access among young people.”

While some young people who consume cannabis might have increased their consumption or frequency of consumption since legalization, studies have failed to show the spike in youth use that critics of legalization regularly warn about. In September of last year, a report published by the Journal of the American Medical Association found that legalization’s overall impact on adolescent cannabis use is “statistically indistinguishable from zero.”

In Colorado, where the first state-legal cannabis retail sales began nearly eight years ago, a survey published recently by the Colorado Department of Public Health and Environment found that adolescent marijuana use in the state dropped dramatically during the past year.

Sen. John Hickenlooper (D-CO), Colorado’s former governor, opposed the state’s legalization proposal when it went to voters in 2012, in large part because he feared that the policy change would encourage youth use. “A big focus for me was I was so nervous about kids,”  he said earlier this year, including his own children.

“I think we’ve proven and demonstrated that there is no increase in experimentation among teenagers,“ he continued. “There is no change in frequency of use, no change in driving while high—all the things we most worried about didn’t come to pass.”

Despite warnings from critics that legalization would increase youth use, reform advocates advocates have long argued that ID checks and other forms of regulated access would mitigate the risk of adolescent consumption.

A recent study out of California found that “there was 100 percent compliance with the ID policy to keep underage patrons from purchasing marijuana directly from licensed outlets.”

The report points to studies that plainly contradict claims often made by prohibitionists that creating regulated cannabis markets would lead more underage people to consume marijuana.

One of the most recent federally funded surveys on the topic stressed that youth marijuana use “decreased significantly” in 2021, as did teen consumption of illicit substances overall.

The 2020 federally funded Monitoring the Future survey further found that cannabis consumption among adolescents “did not significantly change in any of the three grades for lifetime use, past 12-month use, past 30-day use, and daily use from 2019-2020.”

A recent National Survey on Drug Use and Health—the same survey from which authors of the new paper drew their data—showed that youth marijuana use dropped in 2020 amid the coronavirus pandemic and as more states moved to enact legalization.

The U.S. Department of Education’s National Center for Education Statistics also analyzed youth surveys of high school students from 2009 to 2019 and concluded that there’s been “no measurable difference” in the percentage of those in grades 9-12 who reported consuming cannabis at least once in the past 30 days.

In a separate, earlier analysis, the Centers for Disease Control and Prevention found that marijuana consumption among high school students declined during the peak years of state-legal recreational cannabis legalization.

There was “no change” in the rate of current cannabis use among high school students from 2009-2019, the survey found. When analyzed using a quadratic change model, however, lifetime marijuana consumption decreased during that period.