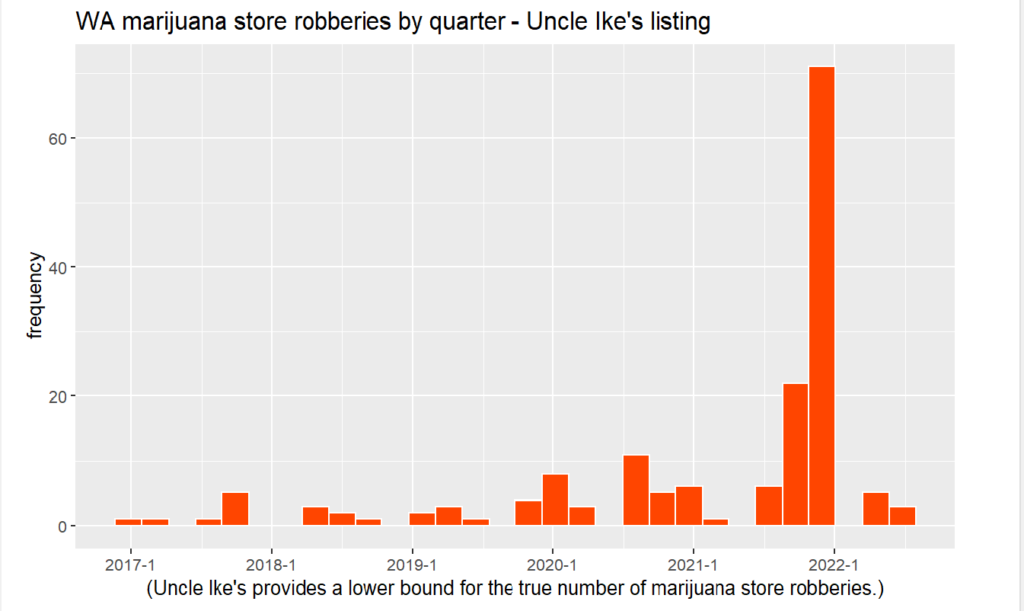 As congressional marijuana banking reform remains in flux, facing a recent setback on its path to passage in the lame duck session, a new report is highlighting one of the key reasons supporters say the legislation is necessary: the status quo leaves cash-intensive cannabis dispensaries uniquely vulnerable to crime.

Also, while some have suggested that the businesses see more crime because burglars are after the marijuana product itself, the report from David Borden of StoptheDrugWar.org shows that cash it the primary target, with limited cases of people stealing only cannabis from the storefronts.

The analysis looks at data on marijuana business robberies and burglaries in Washington State from 2017 to 2022, compiled by the Seattle-based dispensary Uncle Ike’s as part of a novel tracking system. It not only quantifies the extent of the industry’s crime problem, but it also provides statistical and inferential information about what was stolen and the motivations behind the crimes.

Marijuana markets saw a surge in burglaries and robberies, some of them violent or deadly, late last year. Nearly 100 Washington shops were impacted over a period of less than five months, the report shows. And that trend led to amplified calls from advocates and lawmakers to pass the Secure and Fair Enforcement (SAFE) Banking Act, which is meant to allow cannabis businesses to access traditional financial institutions.

“Given what happened in Washington—which could happen again—it would be wholly unjustifiable for Congress to again put off enacting some form of the SAFE Banking Act,” Borden said in a press release.

While the legislation has passed the House in some form seven times, it is again getting caught up in the Senate. Just this week, advocates were disappointed to learn that SAFE Banking was omitted from a large-scale defense bill that they’d hoped would be used as the vehicle to enact the reform. Now lawmakers are looking at placing it in omnibus appropriations legislation as an alternative.

“Our analysis confirms that cash dominates as the target for cannabis store robberies,” an executive summary of the new report says. “Product also plays an important role, but almost always in combination with cash; whereas cash on its own gets targeted in roughly 50 percent of the time, during the incidents for which we could determine what was targeted. Most burglaries, by contrast, appear to only target product.”

“Examination of issues that naturally came up while exploring this topic point to understandings which highlight the urgency of passing SAFE Banking, but also of ways that SAFE on its own may fall short of achieving the full remedy needed by businesses and workers,” it continues.

One of those potential shortcomings, the report says, is the current focus on normalizing depository transactions for cannabis businesses. Without language that addresses credit card processing, marijuana retailers may continue to be more reliant on cash than those in other sectors.

“There will be more left to do after Congress passes SAFE, for the robberies problem to be thoroughly addressed,” report author Borden said in the press release. “One remaining piece is to specifically greenlight purchase transactions, which is how cash enters the system. The current language of SAFE explicitly addresses only depository banking.”

The report also identifies other steps that are needed to address the issue.

“Security, worker training, and likely other factors, will continue to have importance for cannabusinesses, regardless of what happens with SAFE or further measures,” it says. “In the meanwhile, the cannabis community in other states can help, by duplicating the tracking effort pioneered in Washington by Uncle Ike’s.”

The report contains a series of recommendations, the first of which is to pass a package of incremental marijuana reform legislation, or SAFE Banking at the very least. It adds that the legislation needs to ensure that marijuana businesses are able to process credit and debit card transactions.

Federal and state regulators should “review their policies with an aim toward facilitating greater adoption of electronic payment for cannabis stores,” it continues.

Additionally, states should “provide funding for security measures to small and midsize cannabis stores,” and employee training should be improved “with respect to emphasizing the reasons for cooperating with robbers and how to avoid escalating tensions in robbery situations.”

The prospects of passage for SAFE Banking in the lame duck remain uncertain, especially in light of the recent setback where it was excluded from the National Defense Authorization Act (NDAA).

While the bill’s House sponsor, Rep. Ed Perlmutter (D-CO), said on Wednesday that he’s not giving up yet and is looking at government funding legislation as an alternative vehicle for the reform, Senate Minority Leader Mitch McConnell (R-KY) separately signaled that he would work to derail that effort too.

While the omission of banking reform in NDAA has seriously disappointed advocates—and the fight seems to be brewing over enacting it through separate omnibus legislation—details have also been emerging this past week about the so-called SAFE Plus package that Senate Majority Leader Schumer (D-NY) has been working on for months with bipartisan and bicameral offices.

The framework for that package, which could also be introduced and advanced as a standalone, is expected to center on the SAFE Banking Act as well as a separate bipartisan proposal to incentivize state-legal cannabis expungements.

Sources have been telling Marijuana Moment for the past several months that lawmakers have also been discussing adding to SAFE Plus language to protect Second Amendment rights for cannabis consumers by exempting people in legalized states from a federal restriction that bars any “unlawful user” of a controlled substance from owning a firearm. Politico reported on Monday that the current negotiated package does, in fact, include the Gun Rights And Marijuana Act (GRAM) Act.

Meanwhile, at the request of certain Senate offices, the Justice Department wrote a recently disclosed memo earlier this year outlining areas of the SAFE Banking Act that it identified as potentially problematic. While Senate sources said that those issues have been fixed in the latest language, some GOP senators arranged a meeting with DOJ on Monday to go over the concerns.

Those lawmakers who met with department officials were Sens. Pat Toomey (R-PA), Jim Inhofe (R-OK) and Chuck Grassley (R-IA), according to Politico.

Schumer had said in October that Congress was getting “very close” to introducing and passing the marijuana banking and expungements bill, citing progress he’s made in discussions with a “bunch of Republican senators.”

Sen. Cory Booker (D-NJ), meanwhile, said following the election that Democrats who want to enact cannabis reform must either do it “now” during the lame duck session or wait until “many years from now” when his party has a shot at controlling Congress again.

Booker previously opposed moving marijuana banking reform before Congress effectively ended prohibition with an eye toward equity. But he softened his position in recent months, becoming increasingly open to moving the incremental legislation.

For some advocates, support for the so-called “SAFE Plus” package will be largely contingent on the details of changes to the banking language, as they’re discontent with the current provisions that have passed the House in some form seven times now.

They’re further called for changes to require banks that work with the cannabis industry to demonstrate non-discrimination in lending, as Supernova Women Executive Director Amber Senter wrote in a recent op-ed for Marijuana Moment.

These amendments align with some of the SAFE Banking Act recommendations that Cannabis Regulators of Color Coalition (CRCC) outlined in a paper sent to legislative leaders in August.

The Independent Community Bankers of America (ICBA), meanwhile, sent a letter to Senate leadership last week, calling for a floor vote on the SAFE Banking Act “without further delay” by the year’s end.

“This legislation enjoys strong, bipartisan support, would resolve a conflict between state and federal law, and addresses a critical public safety concern,” ICBA, which commissioned a poll demonstrating that support earlier this year, said. “We urge its enactment without further delay.”